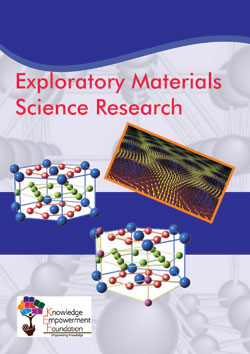 Kaolin and Bentonite clays supported metal ions Ce, Pd and Pt, have been used to catalyze hydrogenation reaction of phenylacetylene. The purpose was to fabricate natural clay-based catalysts for selective hydrogenation of phenylacetylene to styrene. The reaction was performed into hydrogenation reactor connected to gas chromatography.Chemical composition of both clays was analyzed by atomic absorption spectroscopy and their particle size and BET surface area were measured. Both clays were found to be with high Si/Al ratios with Bentonite more Iron rich than Kaolin. Kaolin based catalysts showed higher catalytic activity and semi-hydrogenation selectivity compared to bentonite-based. Particularly, Pd/Kaolin exhibited a high conversion rate and styrene selectivity close to those reported for Lindlar catalysts.

Physical Properties Of Materials That Determine Reversible And Irreversible Deformations

Abstract
The mechanisms of reversible and irreversible deformations are considered using a model of mechanics based on the concepts of space, time and energy. Local energy, as a generalized scalar function, is represented as a linear combination of independent invariants of the equations of motion in the form of Lagrange with the addition of terms that characterize the processes of dissipation and hardening. The use of material density as a General factor of physical properties involved in the mathematical formulation of the concept of "energy", which determines the scale of the energy scale for all types of energy manifested in the movement of solids, is justified. Arguments are given in favor of switching to a new scale of average stresses, including on the basis of comparing changes in potential and elastic energy during deformation under the influence of its own weight. A variant of experimental determinationcharacteristics of the elastic properties is proposed. The possibilities of spontaneous processes of energy transfer from one form to another within one invariant for elastic deformation and with simultaneous change of several invariants for irreversible deformation are noted. An interpretation of the coefficients associated with the physical properties of the material in the field of irreversible deformations is proposed using the unified curve hypothesis and the theory of plastic flow. The determining role of density, heat capacity and coefficient of linear expansion of the material in the processes of deformation and the energy state of particles is proved.

Composites Of Zinc And Cis-Dinitroglycoluril Isomers - A DFT Treatment

Abstract
An insensitive explosive, cis-1,4-Dinitroglycoluril also known as DINGU, is considered to investigate the compatibility of it and its nitramine isomers with zinc in 1:1 composites. The model composites of them have been subjected to density functional treatment at the level of B3LYP/6-31++G(d,p). Within the restrictions of the theory and the level of calculations performed, it has been found that two of the model composites considered are unstable and undergo N-NO2 bond rupture. Only the third one, in which N-NO2 bonds exist in different rings but nearby of each other is stable. Some physical and molecular orbital properties of the systems are obtained and discussed.

Hydrothermal Synthesis Of TitanateNanostructures As A High Surface Area Adsorbent

Abstract
In this research, titanate nanostructures were prepared via a simply hydrothermal method with different hydrothermal temperature which are 100, 150, 200, 250 °C for 24 hours. Commercial TiO2 powder (merck) was used as a precursor and the synthesized samples were characterized using FT-IR, XRD, FESEM, nitrogen gas adsorption and TG analyses. The results revealed that the structure, texture and morphology of samples strongly depend on the temperature of hydrothermal treatment. Hydrogen trititanatenanofibrous was produced at 150 °C, meanwhile, sodium trititanatenanorods were obtained at 200 and 250 °C. At low hydrothermal treatment (100 °C), no reaction was happening. The diameter of nanofibrous and nanorods were found to be (25-30) nm and (250-300) nm, respectively. Hydrogen trititanatenanofibrous possessed the highest surface area due to their small elongated fiber structures thus offers a great potential as adsorbent.